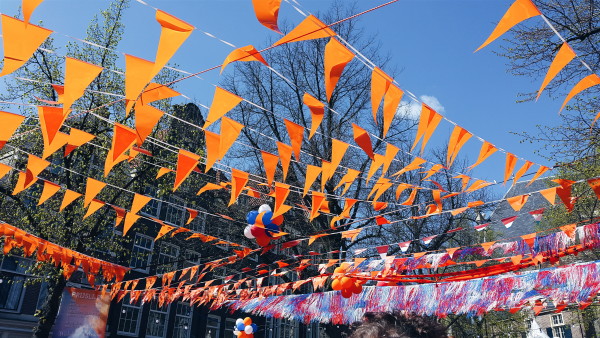 If you’re not Dutch and you are visiting our country on the 26th/27th of April, you’re in for a treat.. Kingsday 2019 (previously called Queensday) is a true happening in the Netherlands. First of all, we celebrate the Kings birthday and everybody gets a day off work. Secondly, there are a large number of flea markets. It’s all happening throughout the country but the city of Amsterdam is probably the biggest when it comes to selling “stuff” on the streets and organizing cool parties. Afterwork Kingsnight Edition at Bar Lely
When? 26th of April from 6pm till 3am
Bar Lely serves traditional Dutch Frikandelen and oysters. The in house Bar Lely DJ will play some disco-funky tunes until late..


Kingsnight at Le Patron
When? 26th of April 6pm – 1am
This year they host a Dutch night with many Dutch sing along numbers. The Line up? Quincy Schellevis, Danilo Kuiters, Robert Leroy Danny Plezier. Entree is free and the beers are cold!

P. King (restaurant) Kingsnight and Kinsgday
When? 26th of April 7pm – 1am / 27th of April 12pm – 8pm
Probably the best Kingsnight & Kingsday street party in Amsterdam if you ask us. For the last 10 years, this is the place to be on the corner of the Vijzelstraat & Herengracht. Deep house and techno makes this a yearly dancing event which attracts a large crowd. Be early or have a bad dancing spot. They also do a free party on Kingsday. for more info check: Facebook This is an outdoor event.

Oranjestad Kingsnight
When? 26th of April 10pm – 5am
With 3 area’s this party is going to be a bang! DJ’s like Geza, Heartbreak, DIO and Yung Internet will perform. Tickets cost €20,- and are still available! Best free parties on Kingsday 2019:
» Westerstraat for beer, music and games. Outdoor
» Vijzelstraat, in front of cafe P.King or Le Patron as mentioned above. Outdoor
» Noordermarkt, Rewind & het Partyfeest, outdoor
» 9 Straatjes, always a party! We love this neighbourhood during Kingsday.
» King of the Jungle: de Tulp x Super Social, at Heineken Marieplein. In and outdoor
» Koningsdag FISSA at Waterkant, Hip-Hop tunes overlooking the waterfront in the middle is Amsterdam. In & Outdoor
» NDSM Vrijhaven, for a party called These Guys Indoor & Outdoor
» Pllek in North Amsterdam for escaping the mass, live bands and cocktails. Info Inside and Outdoor
» Koning Nieges – Baskèts / Jajem at Meneer Nieges. Enjoy a BBQ, cool drinks and lot’s of DJ’s. Info
» Kingsday Westerpark and in particular at Mossel & Gin where the gin is flowing and the music is free. Outside
» Anywhere alongside the canals of Amsterdam! »Vondelpark (large and best flea market for children)
» Jordaan (flea market along the canals for all)
»Beethovenstraat (flea market for all in South Amsterdam)
» Apollolaan is a huge street where you can walk for hours
» IJhallen flea market at the NDSM (for children) Inside
» Erasmus Park, with live music and food, from 10am
» Westerpark, on the grass and anywhere else

» Audio Ubscura & Adriatique, Temp Amsterdam from 10pm, tickets.
» The Breakfast Club at Bret from 7am till 6pm on the 27th of April. Tickets are €17,-

Have fun and take some pictures!!