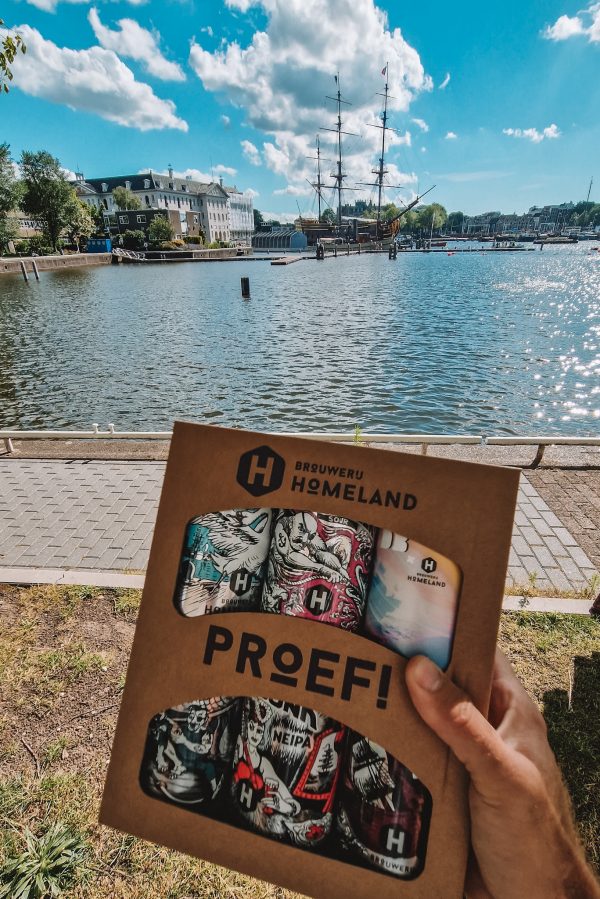 05 Jul BREWERY HOMELAND HAS THE MOST UNIQUE SPOT IN AMSTERDAM

Posted at 23:22h in Amsterdam Guide by Wander-lust 0 Comments

If you love the occasional beer, read on. If not, also read on, because this article is about more than that. Homeland Brewery invited us to explore their beer but also their hidden gem in Amsterdam, which you may not have heard of.

Homeland is a small independent beer brewery that was founded in Amsterdam, back in 2016. Big names in the nightlife and festival scene Koen Vollaers, and Joost Carlier start a small Brewery together with Bart Maes, a brewer’s son. They do this at a historical location in Amsterdam; The Marine Business Park. Once, a closed and highly secured facility, this area was only accessible to the Dutch Marines. But in 2013 the location slowly opened up for businesses and ventures, and the public. The result is a hub full of inspiring people and creative ideas. Brewery Homeland decided this would be the perfect location, and they took a wise decision – it is estimated that the Marine Business park is now worth billions. It’s still unknown territory for many outsiders, however, slowly but surely people starting to discover this unique area in Amsterdam.

After establishing their Brewery and growing quickly, they move across the road and invest in high-tech production material. To give you an idea; Brewery Homeland is only the second beer brewery in the Netherlands that owns aMeura Mashfilter. Using this special filter machine, allows them to use all the useful components from the malt in a much more efficient way. Making it possible to create specialty beers. In addition, another 30% is saved on the required malts, a huge benefit for the brewing process and the environment. Whatever is left from the press/filter, is then taken to the renowned Lindenhoff Farm to feed the pigs. No waste is wasted! 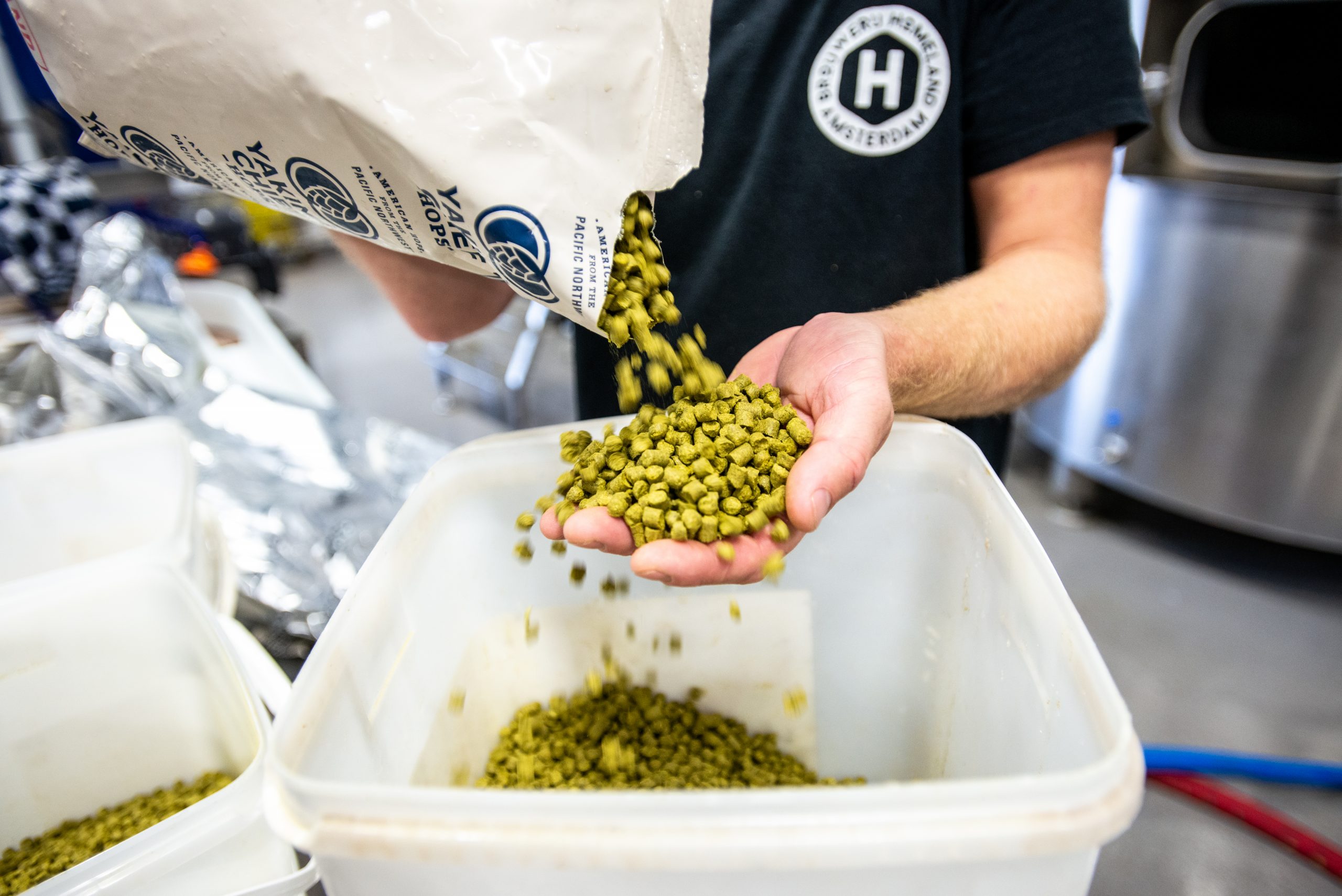 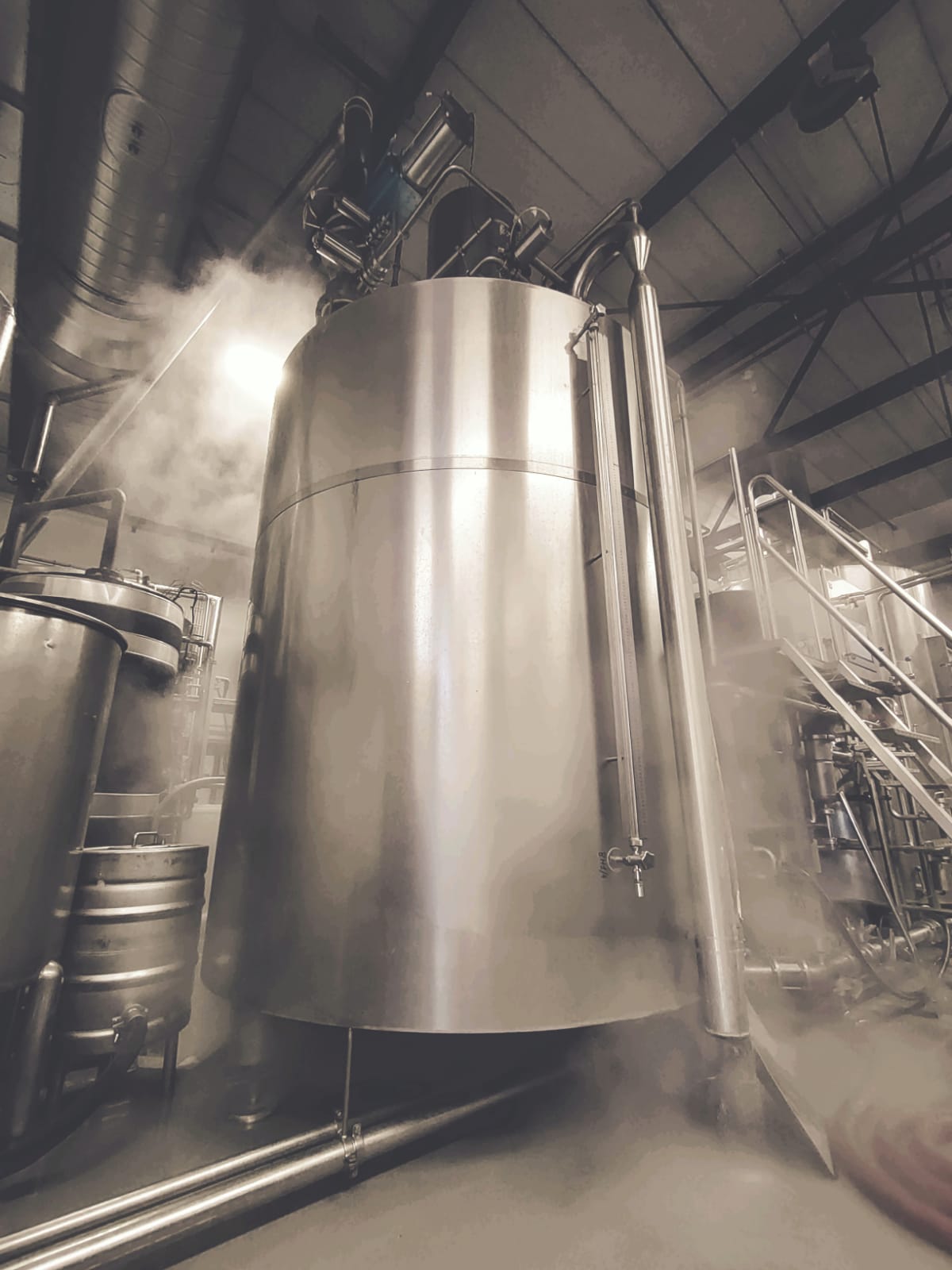 Nice Event: from September 9th -11th Brewery Homeland will host TAB ‘The Amsterdam Beer’ festival at the Marineterrein. This edition will have 15 Amsterdam breweries are bringing their finest beers to ‘our harbour’. There will also be live bands and food trucks. tabfestival.nl

Beer in a can is better for the environment?

Homeland Brewery is the first in Amsterdam and one of the first in the Netherlands to be the proud owner of canned beer. Although you may not think so; a can has many advantages over a bottle.  Firstly, cans are fully recyclable and a lot more sustainable than bottles. In addition, cans do not allow air or light to pass through, making it better for the quality of the beer. Win-Win. 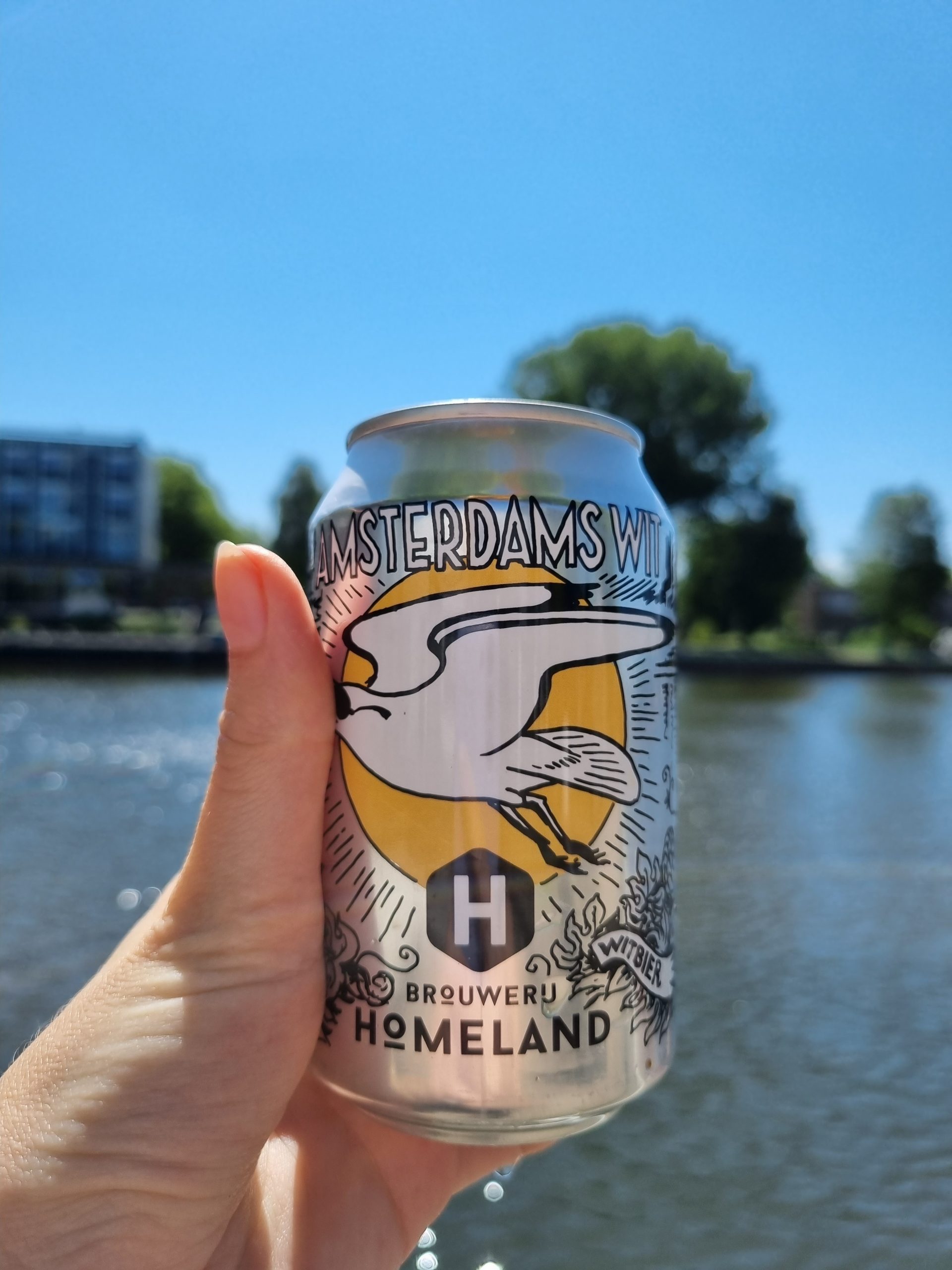 We believe that canned beer is the future of craft beer.

But does it taste good? well, we obviously tried and tested their beers. After a full tour, we drank beer straight from the barrels, but we also sat down at Pension Homeland to try their famous beers. Our favourites are Amsterdams Wit, Zeebonk, and their IPA Katzwijn. Some of them have won some prestigious awards (2 gold, and 2 silver medals) at the Dutch Beer Challenge.

Part of Brewery Homeland is their café/restaurant/hotel. Located on the same business park, on the right side of their brewery, you’ll find Pension Homeland. The building itself is hideous but has an amazing view over the Amsterdam waters. On the left side, you have a grass field where sun-seekers chill, and by all means, it’s also a great natural swimming spot in Amsterdam. The café terrace is buzzing when the sun shines, and the food in the restaurant was really quite tasty. From oysters to veggie rendang or steak with fries. 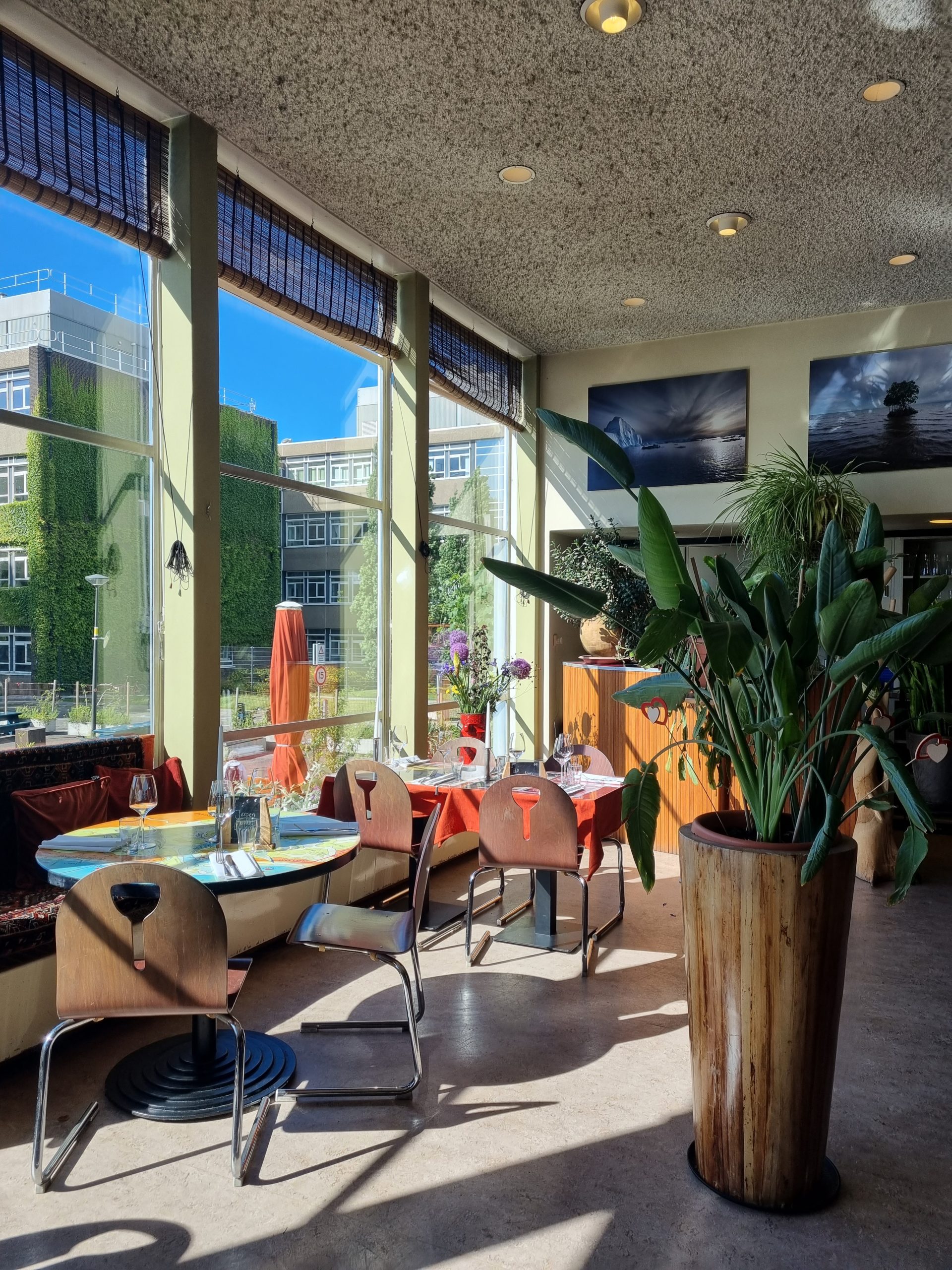 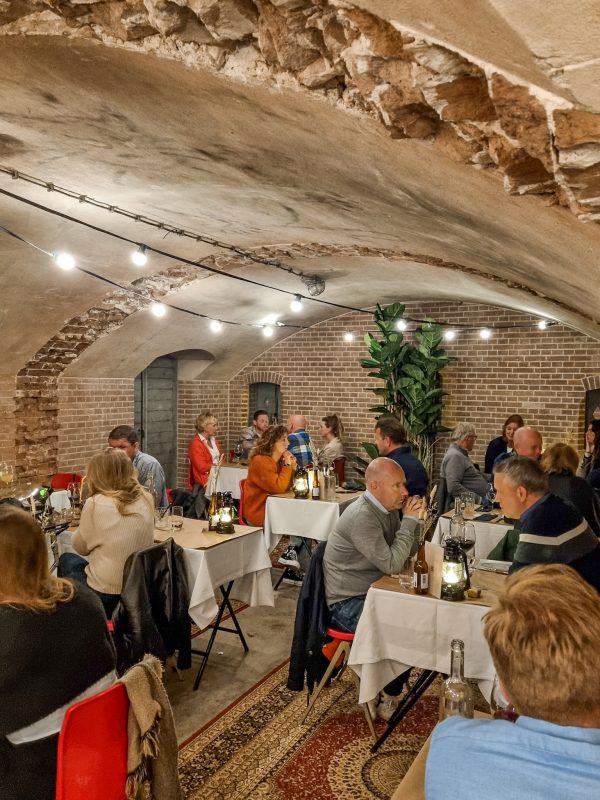 STERKWATER | LUXURY DINING IN A FORT 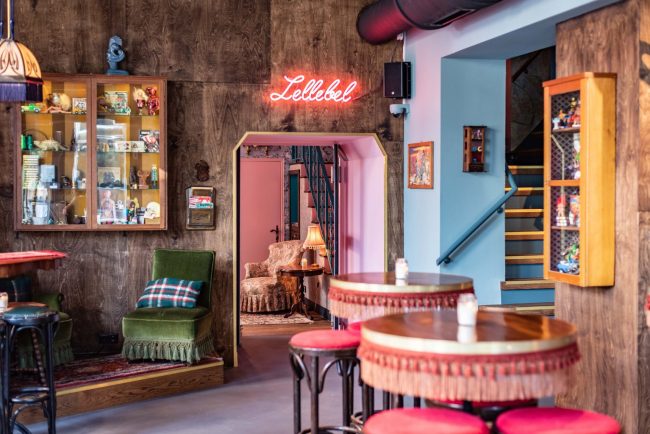 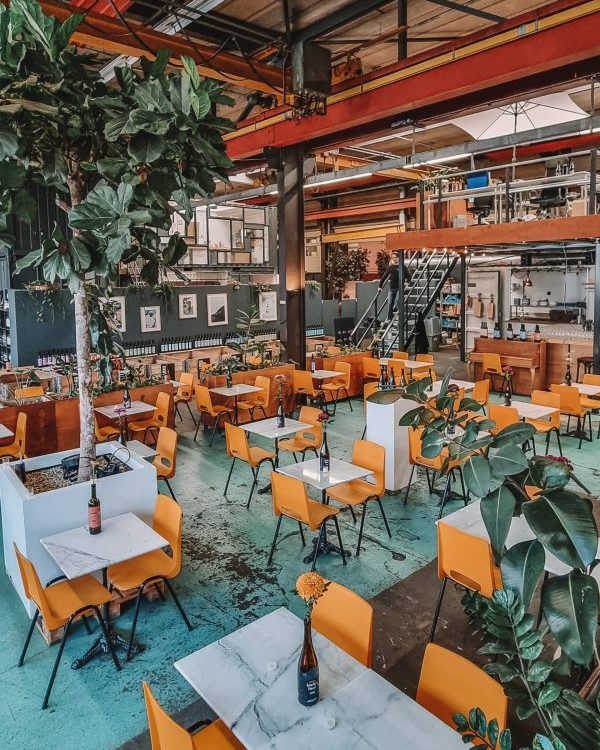