Sticky Post By Wander-lust Posted in Spain, Travel Tips With No Comments Permalink 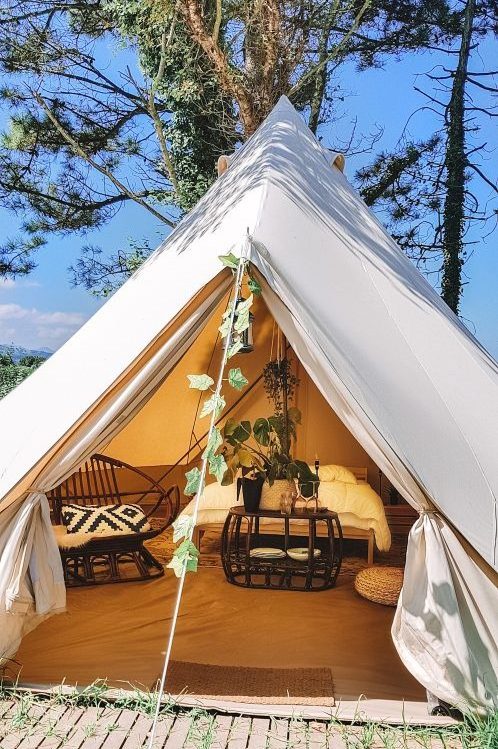 Once you have experienced the surf culture, you will be hooked. Whether you’ve tried it in Bali, Australia, Portugal, France or Spain, surfing is something we highly recommend. There are many surfing spots around the world, but if you’re a first timer, we have a wonderful tip for you; Zarautz Surf Village.

A secluded beach at Zarautz 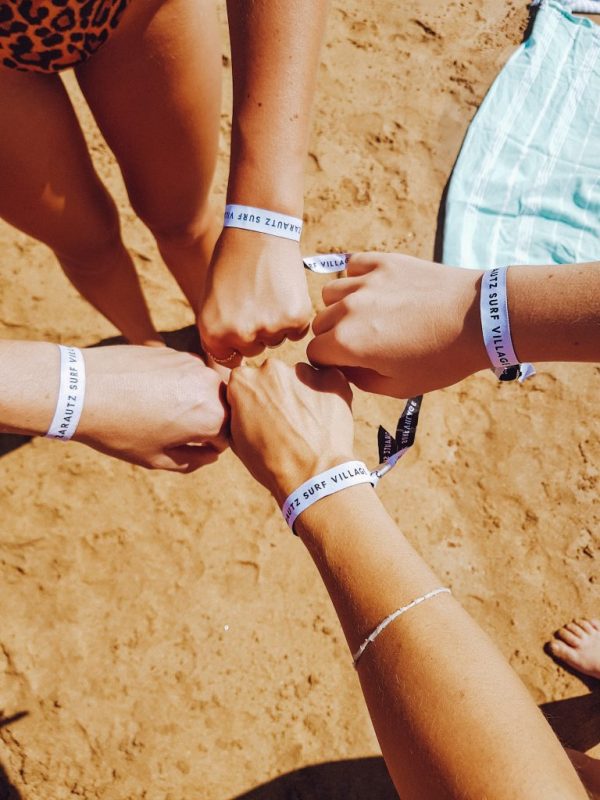 Never taking them off again

Become part of the surfer community

Zarautz is located between the 2 Spanish cities Bilbao and San Sebastian. It’s surfing culture started a long time ago, and it’s one of the best European surf locations, with several surfing competitions held yearly. Zarautz beach is long stretched and very wide, so also very popular for sunbathing.

The camping area is located on top of the hill, overlooking Zarautz coastline. Waking up with this view is priceless. At Zarautz Surf Village you have a few accommodation options; You can sleep in a tent, a camp-inn, a tipi dorm, a deluxe tipi, or you can bring your own camper van. Being the glampackers that we are, we opted for the deluxe tipi. You’ll find all different nationalities at the camp. From Belgium to Greek, they all seem to find out about this place. 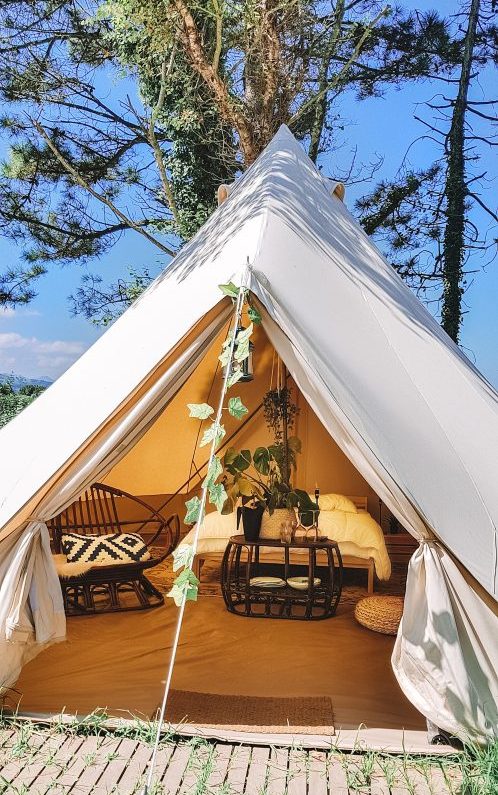 Basic or luxury; you can decide

When you book your stay at Zarautz Surf Village, breakfast (9 – 11) and dinner (7 – 9) are included and the food changes everyday. There is even a champagne breakfast if you’re up for it. Don’t miss out on the BBQ or burger night, as they are pretty good! Drinks at the bar are bought with a drink card, that you can purchase for €15,- and you’ll get a plastic cup that you need to keep until you depart. Thinking about the environment!

The village is not so big, but very cozy. There is a chill out area with 2 hammocks, several cushions and a skate ramp. Beer pong is played at night, and there is always room for a themed evening with fun & games. Remember, it’s a camping area, so the noise has to stop at midnight. Not ready for bed yet? No worries, Zarautz has a few bars to enjoy yourself and San Sebastian is only a 25 minute taxi ride. 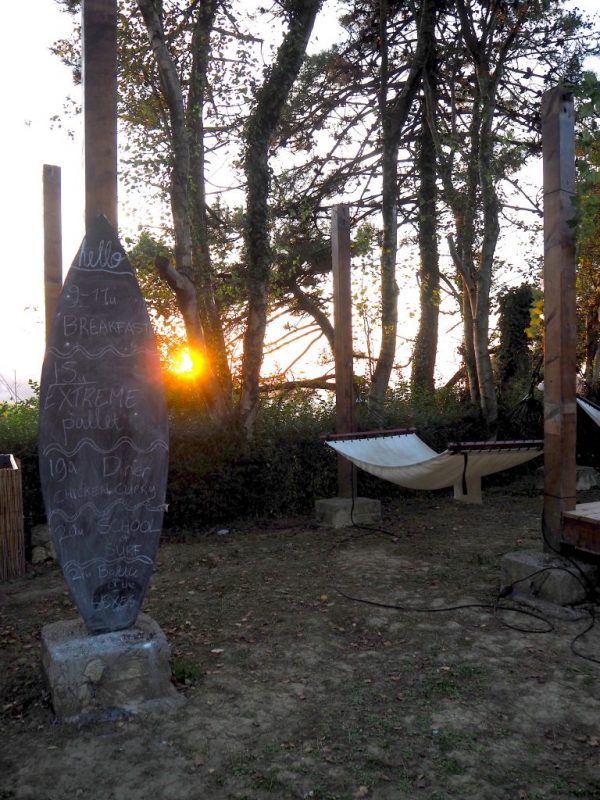 Most people book at least one week at the camp, but we had only 3,5 days. For this reason we only managed to take one surf lesson and one yoga class. Surf lessons are held in the morning and is perfect for beginners. As the day passes, the waves become bigger, so the afternoon is better for the more advanced. There are 2 free yoga lessons included within a basic package, and the classes are great for stretching your body before you get ready to surf. 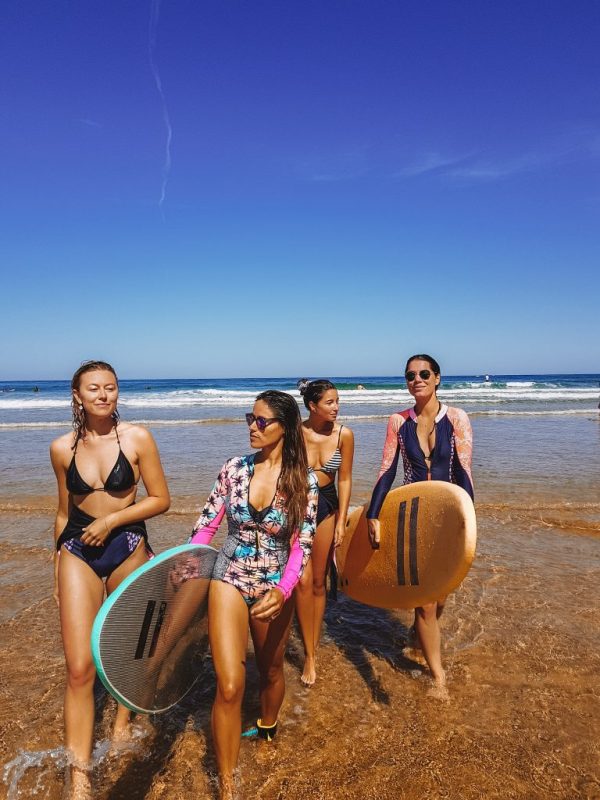 Trying to look like pro’s. All wearing Protest Women 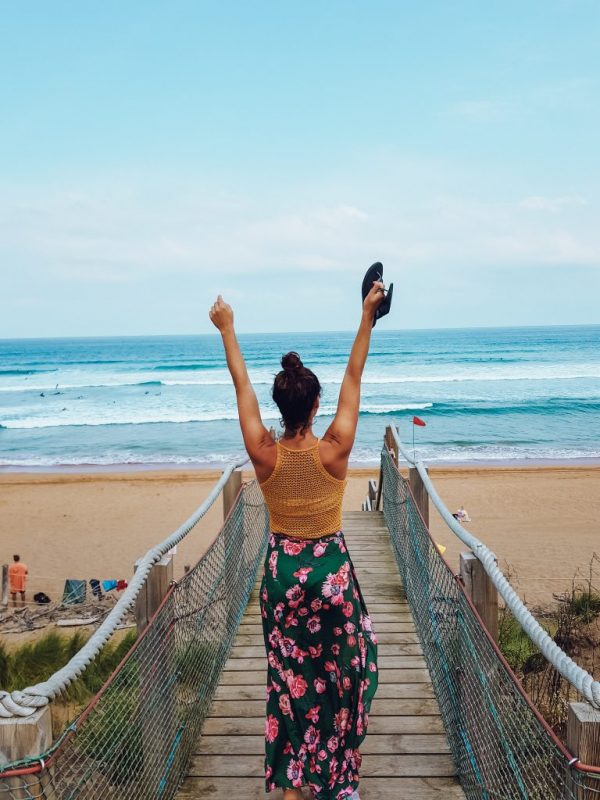 Zarautz has a stunning scenery, with cliffs, green open hills and turquoise water. Take a morning off to walk around before heading to the beach where you can eat a healthy açai bowl at the Shelter Surf Bar. They also serve coffee, wraps, salads and a few pincho’s. Zarautz beach is quite long and you will find several café’s and eateries where you can have breakfast or lunch. 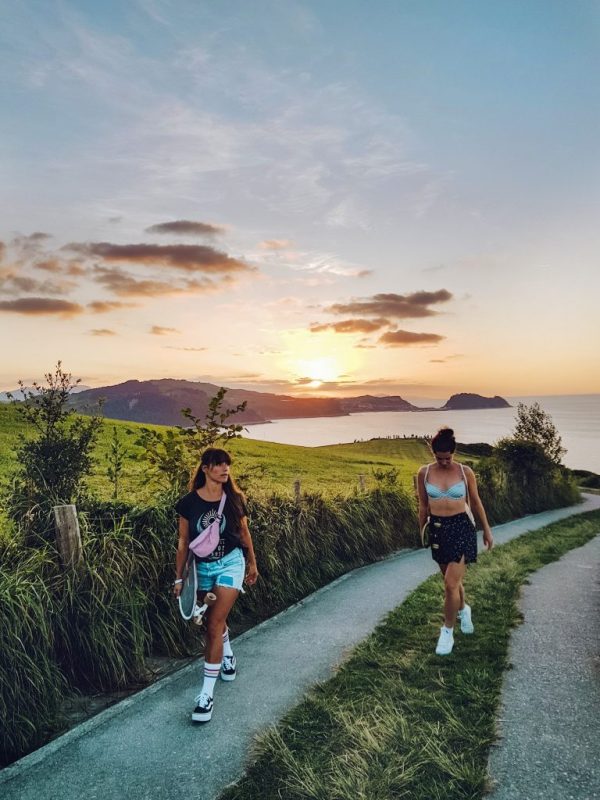 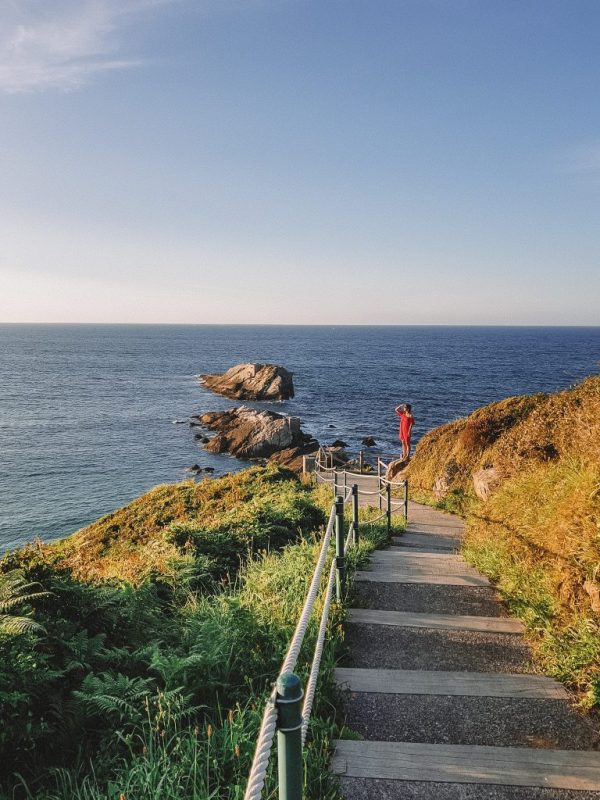 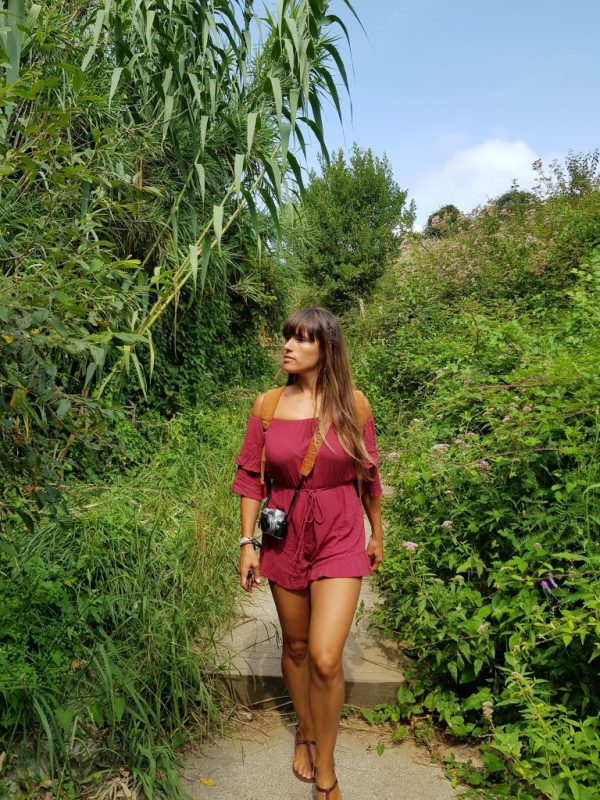 Walking down to the beach 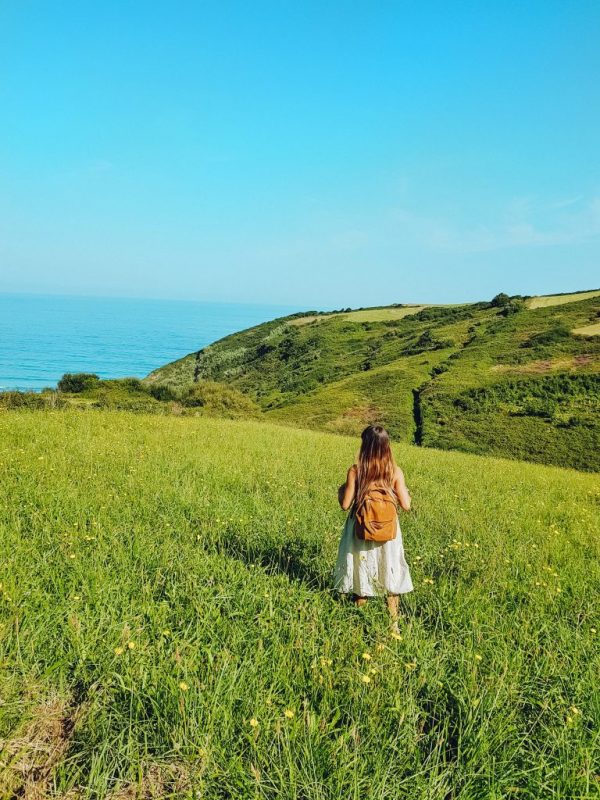 Endless hills in Zarautz. Backpack is from Eastpak 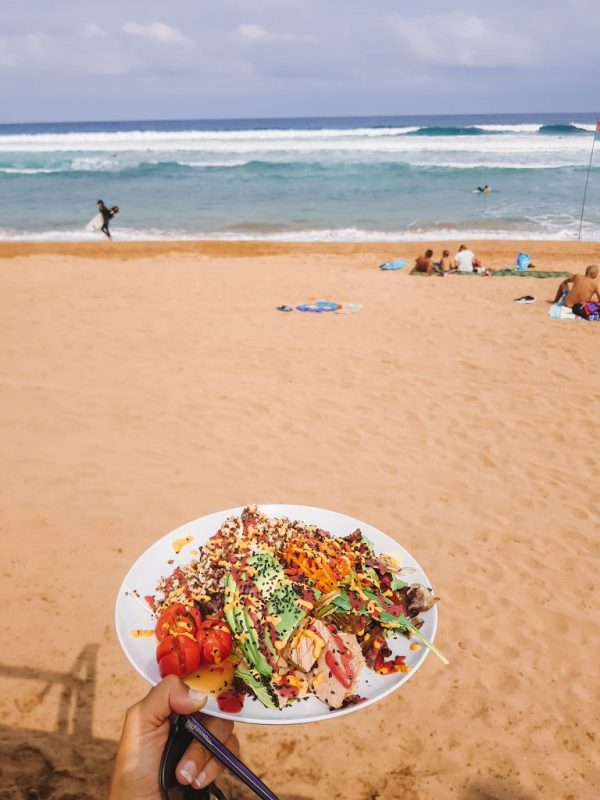 Because San Sebastian is very close by, we recommend you go here for half a day at least. It’s great for shopping, eating out, and it’s easy accesible by train which is about 20 minutes walk from Zarautz Surf Village. The train takes you to San Sebastian in only 30 minutes and costs around €2,50 per person. Ask the staff for details. 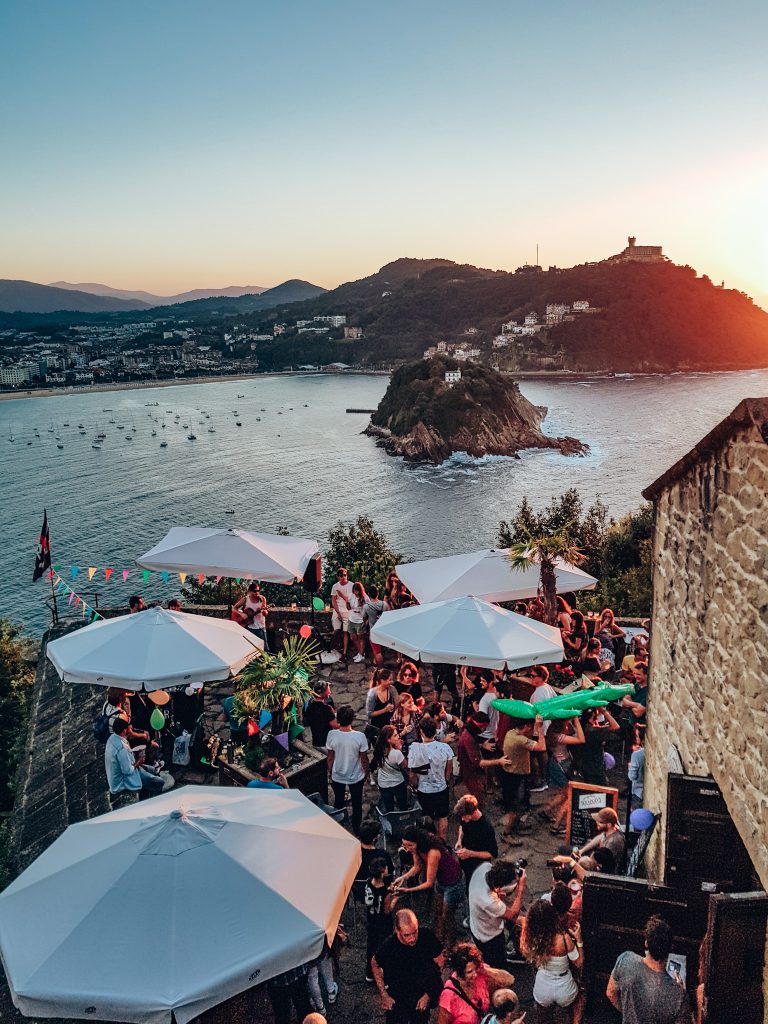 Zarautz Surf Village is open until the 3rd week of September and the new season starts in June 2019. Bookings are available from €259,- (drive-inn) which includes a full week camping and breakfast and activities. (Dinner can be bought extra for €95,- per person for a week). A Tipi Dorm: € 379 and the Tipi Deluxe is only available per week from: € 895

Tip: Bring a warm sweater and pants with you, as it can get quite chilly at night

Sticky Post By Wander-lust Posted in Off the Beaten Track, Top 5. With 2 Comments Permalink 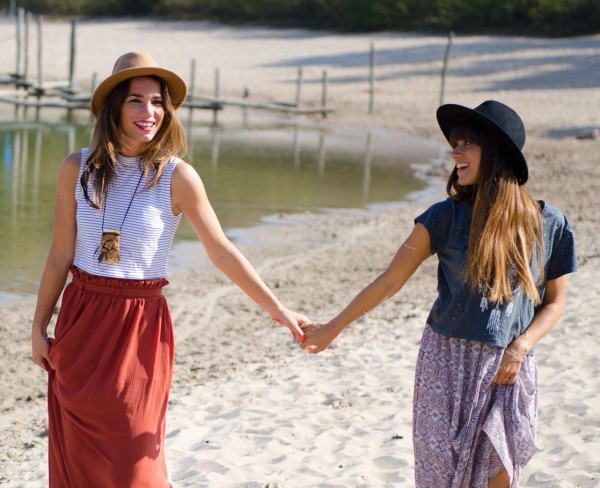 We celebrated international women’s day so a good reason to highlight some amazing women who inspire us to the max. We are so happy to see more and more independent females who pack their bags and travel around the world to show us that it can be done no matter what age, size or background. There are too many amazing women to mention them all but we’ve picked 5 badass travel chicks that we feel set a great example of what a strong female represents.

1. Celine Cousteau, USA & France
She’s a filmmaker, diver and most of all an explorer. Born in California and raised in France, she has certainly seen the world. Celine inspires people all over the world with her documentaires about humanitarian and environmental stories. She speaks 3 languages fluently and uses her voice as a public speaker. Besides all this, she is also a mother to a son. This woman has power!
www.celinecousteau.com 2. Floortje Dessing, The Netherlands
She’s the most famous traveler from the Netherlands. She has seen the whole world from Amsterdam to Greenland, Japan, The North Pole and even North Korea (she and her TV crew are one of the only ones that were allowed to film there). In total she has visited more than 120 countries and for her latest television show she is visiting Dutch people who live in remote places around the world and the TV program scores high! Besides all her travels, she also gives a lot back and she started a fair-trade sustainable clothing store called Nukuhiva. This woman is far from being done with traveling and we love her for it! “These wanderlust women show us that anything is possible”

3. Morgan Brechler, USA
She is the bohemian dream-mother of the world. At least, we think so. Morgan (26) is a (extremely beautiful) young mother from the US who travels and climbs around the most amazing national parks of the USA and other parts of the world with her daughter Haidlie since she was only a small toddler. She recently gave birth to her second child and she is working towards a degree in sustainable agriculture and Morgan is part of a new documentary called Born Wild, celebrating single adventurous mothers who want to instill a love of nature and the outdoors into their children’s lives from the very beginnings. Can we say we are a little bit jealous of this amazing woman? www.instagram.com/morganbrechler 4. Chelsea Yamase, Hawai
She is a Hawaii-based creative, traveling the world as an athlete, model, and writer. She is followed by many that want to be inspired to travel in an adventurous way. She travels the world with her boyfriend and photographer Sam Kolder, and together they take us on their daily adventures. She is pretty but doesn’t even know it. She is just being herself and showing us the beauty of this world. Follow this girl and be inspired! @chelseakauai 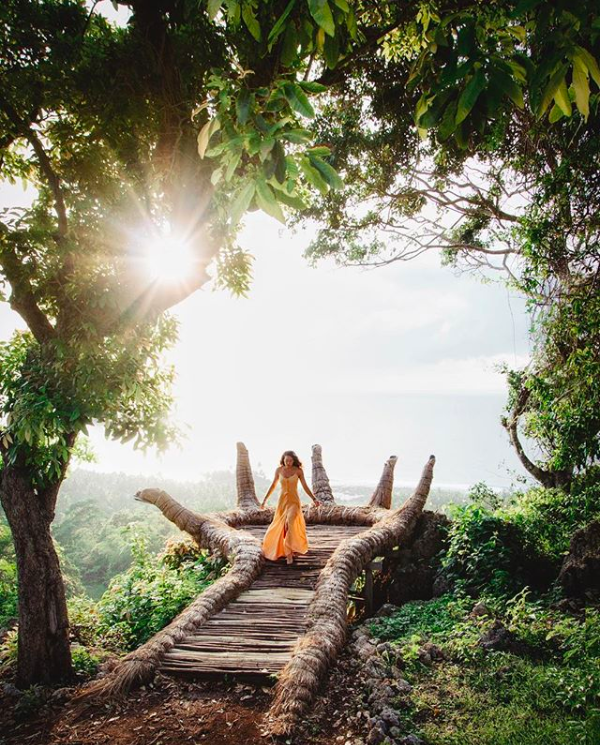 5. Roshni Sharma, India
Everybody told her she couldn’t do it and she proved them wrong. She became the first woman in India who drove all the way from Kanyakumari to Kashmir with on her motorbike. The 5452 km long road was dangerous and the trip was long but that didn’t hold her back. Armed with pepperspray, the 26 year old, took on the challenge and finished the journey. You go girl! The woman and her bike. Source: http://www.deccanchronicle.com/

Sticky Post By Wander-lust Posted in Lifestyle, Philippines With No Comments Permalink 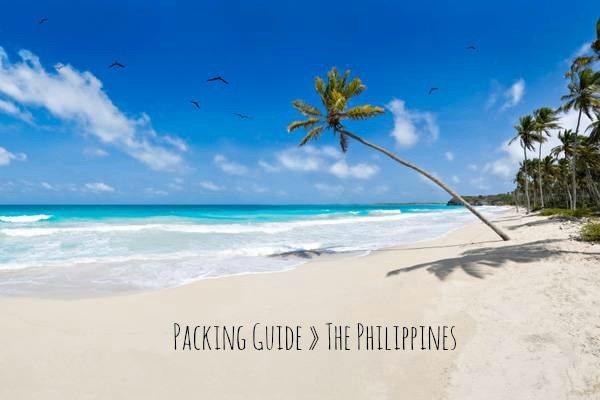 Finally! I am going to cross another country off my bucketlist. I’m going to the Philippines!
It’s been on my list for a while so I’m really exited about packing my bags for this trip. It’s hot and moist in the Philippines and I’ll be backpacking so I’m writing this packing guide accordingly.

The Backpack
A lot of miles, a lot of traveling. I’m going to travel for 3,5 weeks so I will bring a backpack. After 7 reliable years, it was time to ditch my old one and get a fresh pack.
I got the The Alpamayo ND from Lowe Alpine. This backpack is perfect for this trip and I’m going to tell you why;
This Alpamayo ND is especially designed for women so it fits perfectly. It supports your back, you can access you bag easily from the side and top and it has useful features including stretch bottle pockets, removable hydration pack and unique tip grippers.
Buy it here! Carry on luggage
» Small Backpack from Eastpak. Funky and handy for day trips
» Hipbundel from Eastpak. This is super handy for cash, passport or other important documents. Love the print on this one!
» My new sunnies from Komodo / Look fresh, look sharp
» Sony Action Cam / Never miss any action!
» Ipod with my new headphones from skullcandy / The sound is amazing on these!
» Travel journal / Great for those long hours in the plane, bus or boat. Travel Gadgets
I love travel gadgets! Every year I find new amazing stuff that I want to test or simple want to get.
On this this trip I will bring 4 travel gadgets that I can’t leave without.

My Olympus OMD-E10 camera is my newest baby and I won’t go to a beautiful place without it. Pictures and video’s are amazing and it has a build in stabilization which makes live a lot easier! More info about this camera here.
My Sony Actioncam for those underwater action moments!
Can’t leave the hotelroom without a emergency phone charger that you can easily take to the beach or a restaurant.
I use the Powerbank Pro 9000 charger from Avanca. It’s extremely powerful with a capacity of 9000mAh. Depending on the device you connect to this powerbank, your battery will be charged one or several times. Get yours here. The worst thing that can happen to you, is to lose your luggage on arrival. This clever interactive tag from Moustag makes sure your bags are easily found.
If your bag is found you will receive a notification on  the Moustag app. Besides this you can also keep track of where you’ve been and share this with your friends. Pretty cool right? Skin products
Ok, I am not a girl who uses a lot of make up and foundation. Mainly just because I can’t be bothered but I am getting older so I should look after my skin.
I won’t leave for the Philippines without my Dermalogica products! I swear by their products because of a few reasons;
» They don’t test on animals (happy me)
» They only use natural ingredients
» They truly care about your skin! (they only sell 50+ sunscreen because this is really what our skin needs)
They sell a really handy travel kit which includes the multi active toner which I will bring in my carry on bag so I can moisturize during the flight (check my previous blogpost about in-flight skin tips)
My advice is to get your skin analysed and find the products that suit your skin. Visit their website for more info. All my favorite travel products!

So what will you bring?