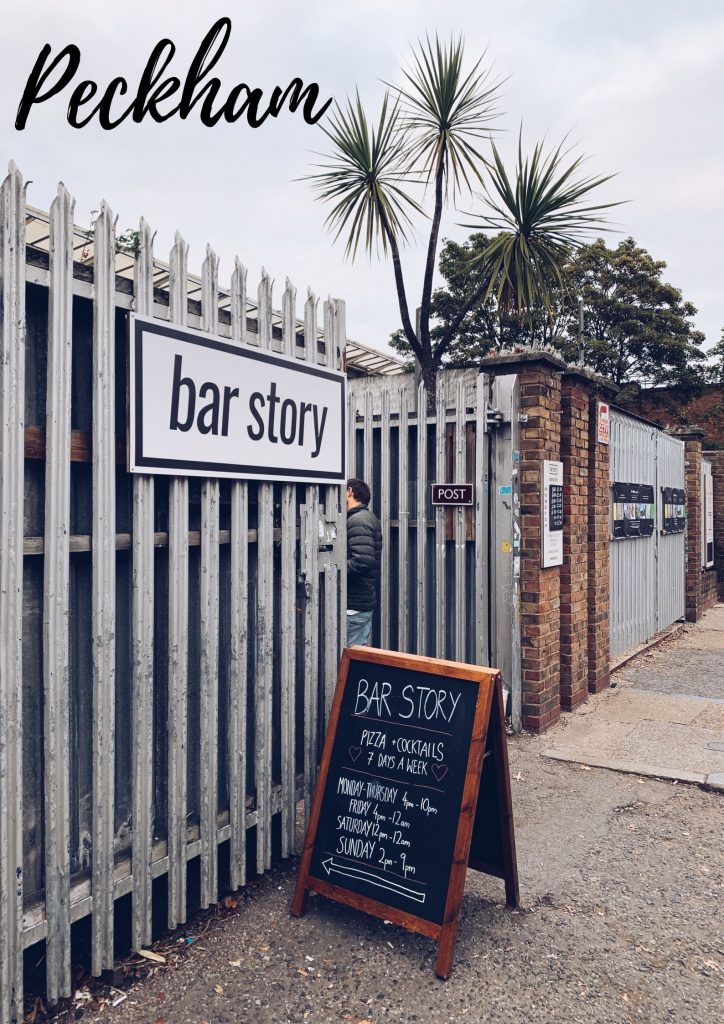 In the last 3 years, Peckham has made a serious name for itself as one of the hippest postcodes in London. From its many destination rooftop bars to vast array of go-to restaurants, Peckham is a vital weekend hangout.

It’s seen a huge level of gentrification which paves way to a rough-and-ready meets not-to-be-missed appeal, aided by narrowly missing out on the top ten coolest neighbourhoods on the planet as voted by Time Out. There’s been a lot of investment, in fact, Peckham library won British architecture’s highest accolade the Stirling Prize. Many of its old buildings and car parks have been turned into trendy spots, which brings the community together through creativity and urban realness. 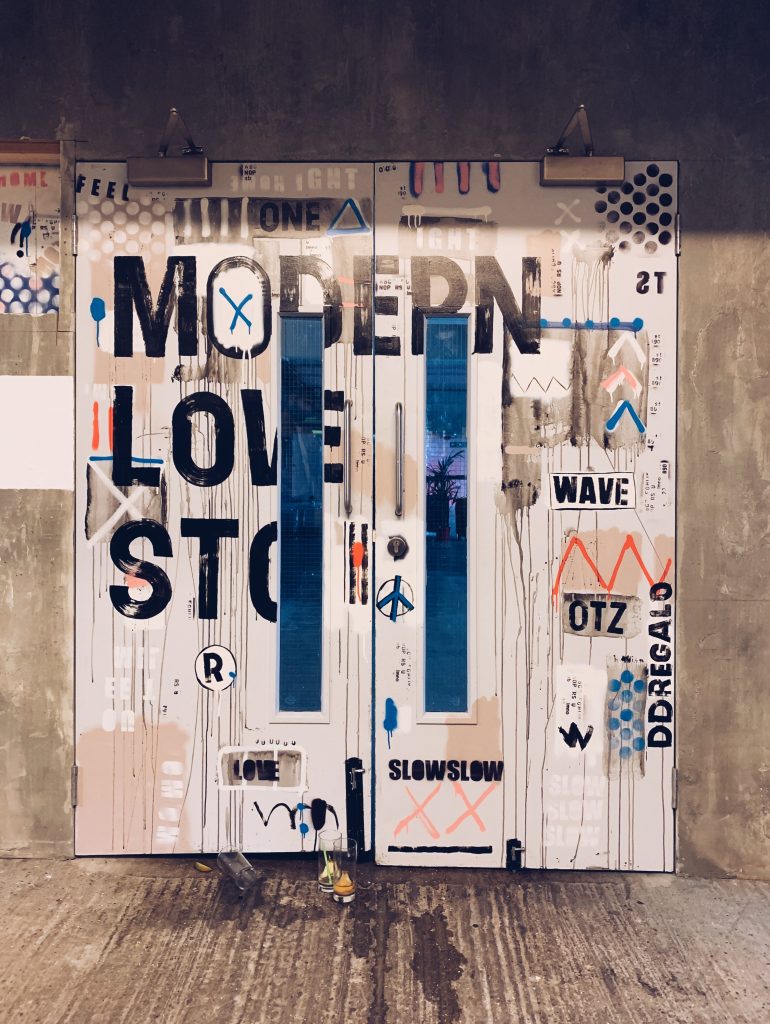 For anyone not familiar, Peckham is for the strong-willed.

The majority of bars here are outdoors so layers are needed; there’s a lot (a lot, a lot) of food markets on the high street meaning that the smell of fresh fish can linger; and plenty of graffiti – this is South London, after all, mate. But don’t let this put you off – there’s plenty to see and do… 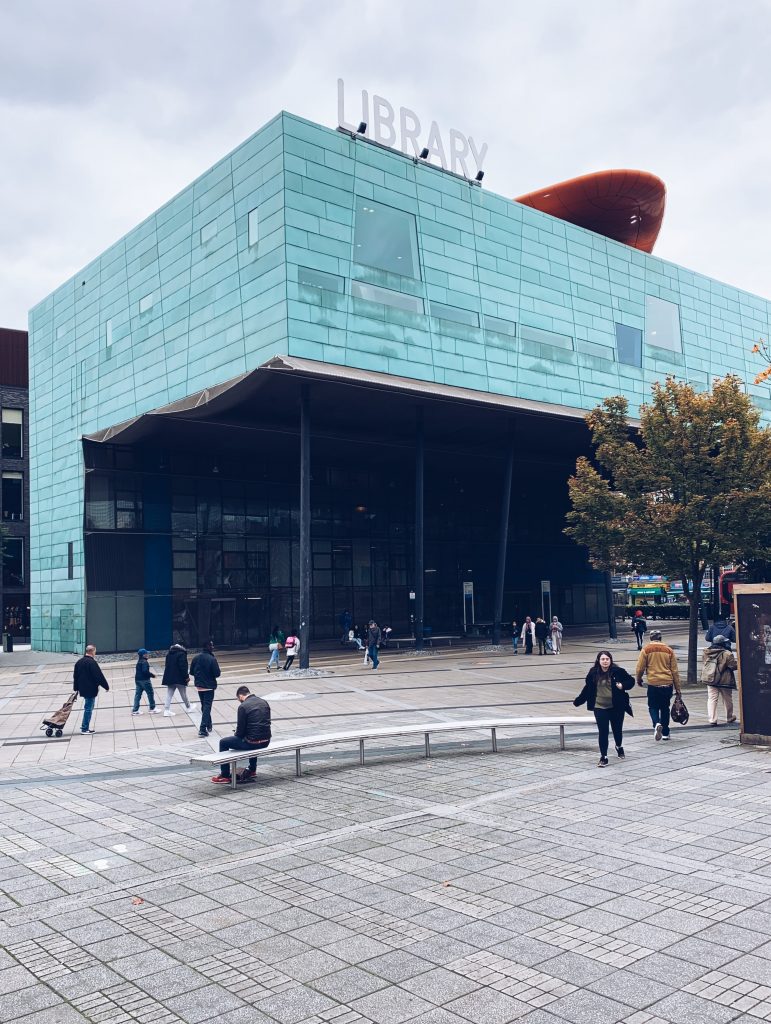 For the ultimate Peckham experience, visit Franks Cafe. Sadly it’s a seasonal destination only – open between May and September. Located on the top floor of Peckham Levels, it’s an open-air bar at the top of the converted car park. The pilgrimage up the six flights of stairs (all painted in shocking pink and glowing blues) gears up visitors for an enchanting experience. With views of all of London which means you’re best to wile your afternoons away there in anticipation of one of the best sunsets in town. On the contrary, in winter months the rest of the floors in Peckham Levels (the six stories underneath Franks Cafe) are well worth a visit. 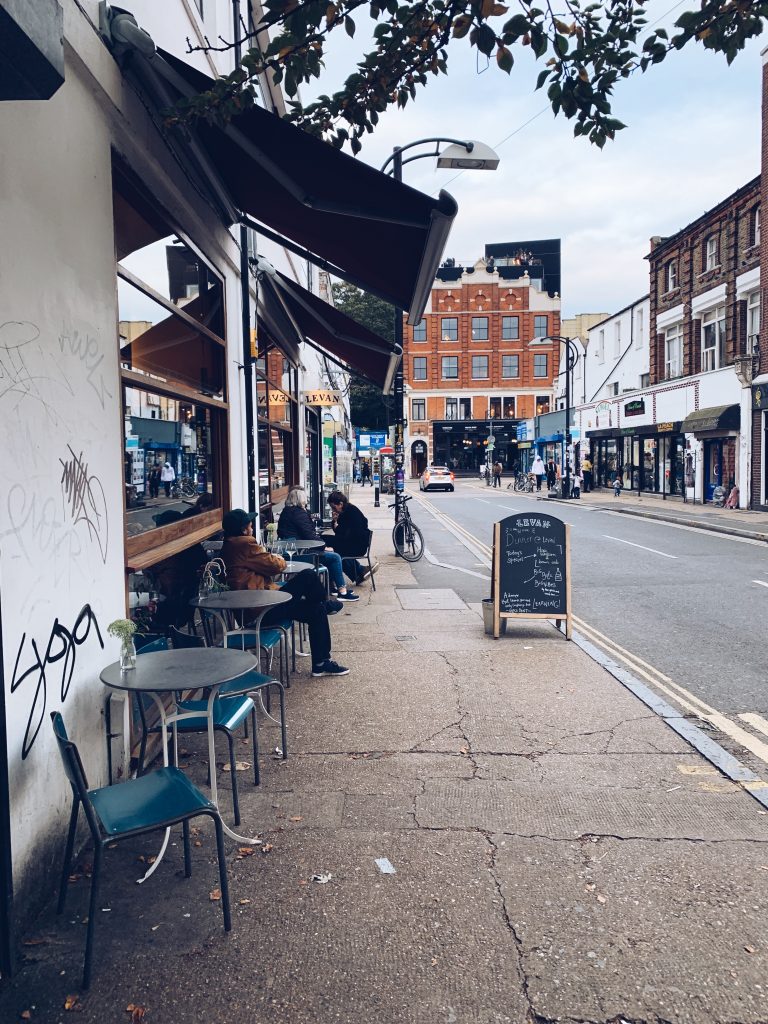 From Near and Far, a tropical themed drinking den guarantees a great time on a Saturday night. If you’re hungry between cocktails you can grab a bit to eat at one of the indoor street food stalls. There’s live music, ping pong tables a yoga studio, hair salon, art installations and night club with Modern Love Stories.

Further down the road is the Bussey Building. Complete with a rooftop cinema, the Bussey Building is a multi-use former cricket bat factory converted into a venue. As well as the cinema, there is also a rooftop bar. This one is a fun and quirky place to enjoy a well-rounded menu of drinks. The rest of the building allows you to pass by for a ceramic class in Kiln rooms. There are co-working spaces, a basement club in a record store in. You can visit artists and their galleries to marvel at locally produced art. 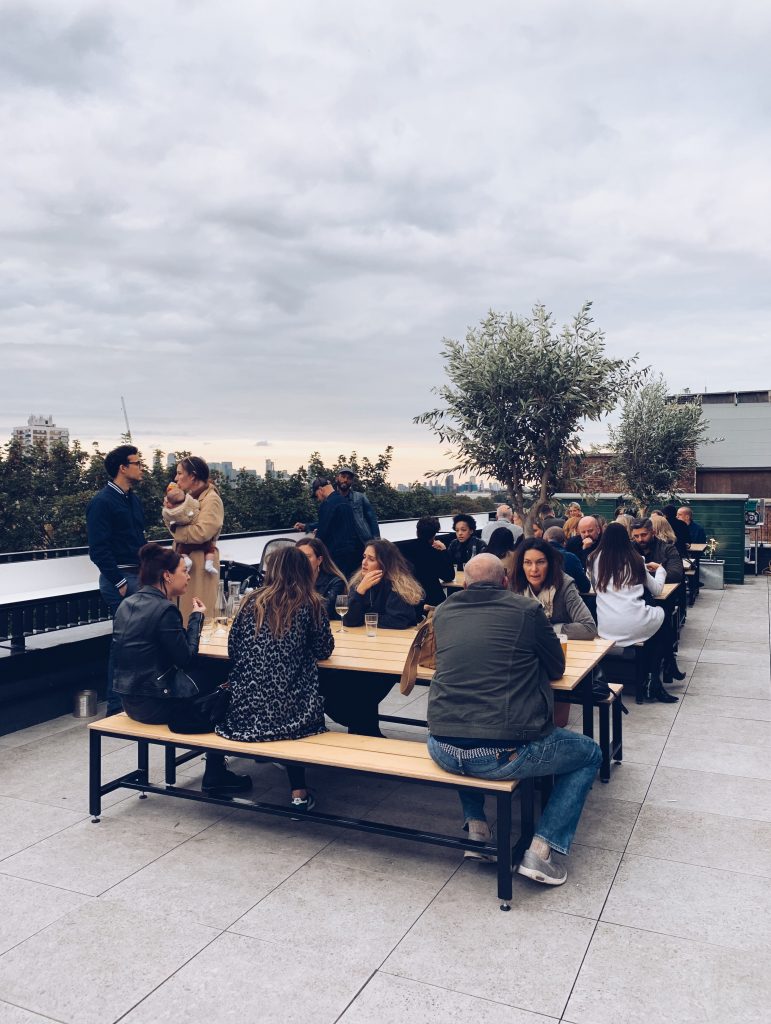 Copeland Park is home to K-ink the tattoo studio, Forza Win – a delightful Italian restaurant and a cross fit gym. Quite the mix of activities to keep you occupied. Copeland Social is probably the most popular bar here. It has something of a cult following amongst the local hipsters. With this in mind, bag yourself a picnic bench outside if you’ve brought enough layers and soak up the vibes. You’re also likely to find a pop up vintage shop or travel fair in the area as well in the industrial warehouse adjacent to the Social. 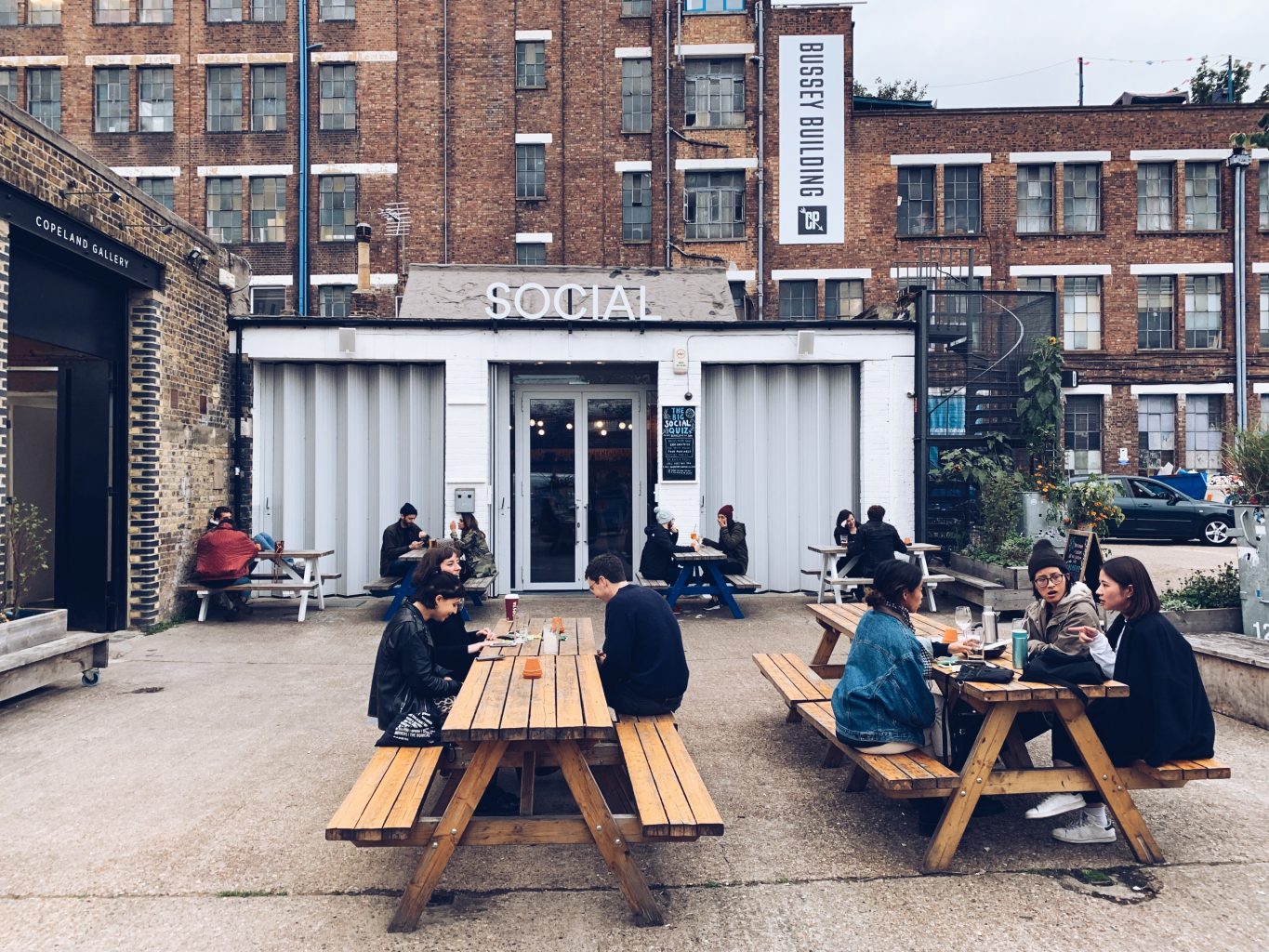 The main way in and out of Peckham is through it’s Victorian-era train station (though there are plenty of bus routes as well). The surrounding area to the station building is home to many of the neighbourhoods most frequented spots. Cole Rooms is located within the former station ticket office, and so is part of the Grand II listed building and is an outstanding dining experience. Refined yet relaxed, their menu is imaginative with dishes cooked in a charcoal grill and oven. Around the corner is Levan – with a spot-on menu of seasonal and inventive food in a relaxed setting. Bag yourself a seat at the window to watch the world go by. with a natural wine (their wine list is also spot on). 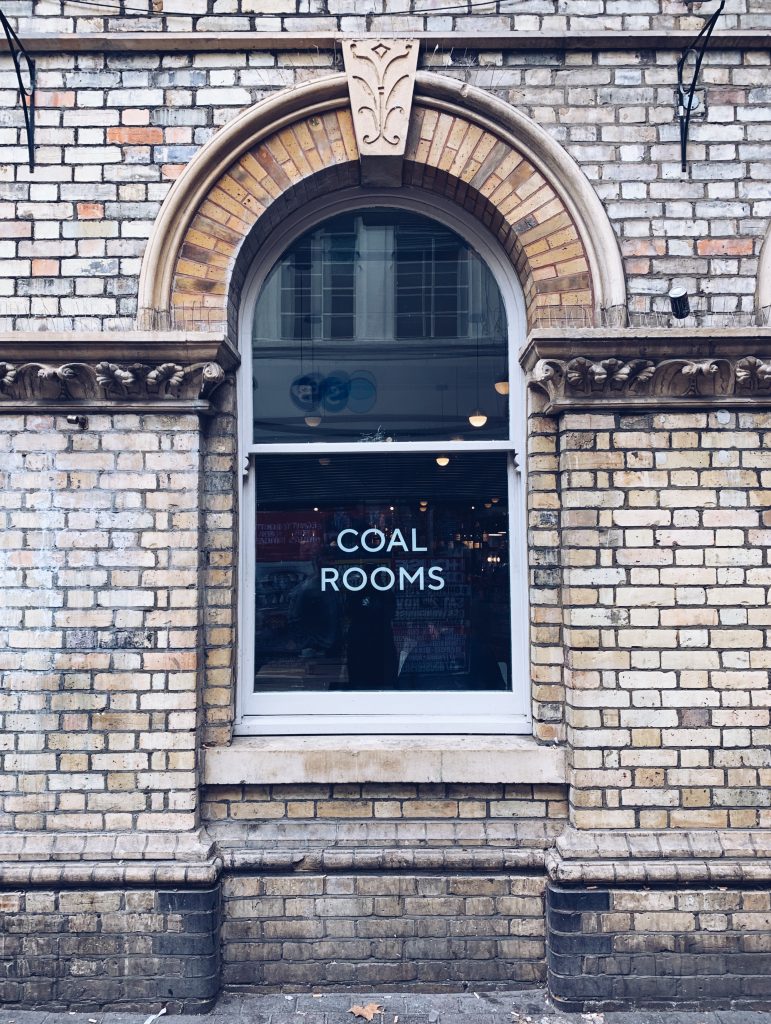 The outstanding Forza Win has opened a second location atop of the new Workplace on Peckham High Street. Named Forza Wine – it’s a wine bar built for stunning views from its 5th floor location on top of Market. Likewise, a new cowering space with studios and hot-hot-dusking families as well as a ramen bar and basement music venue – it’s just a hop, skip and a jump from Peckham Rye Station.

Still in need of inspiration?

Happy hour cocktails and beer as well as sought-after thin crust pizza. What’s not to love about this place located within a railway arch. The industrial vibe is only added to with the sound of overground trains above you every 5-7 minutes. 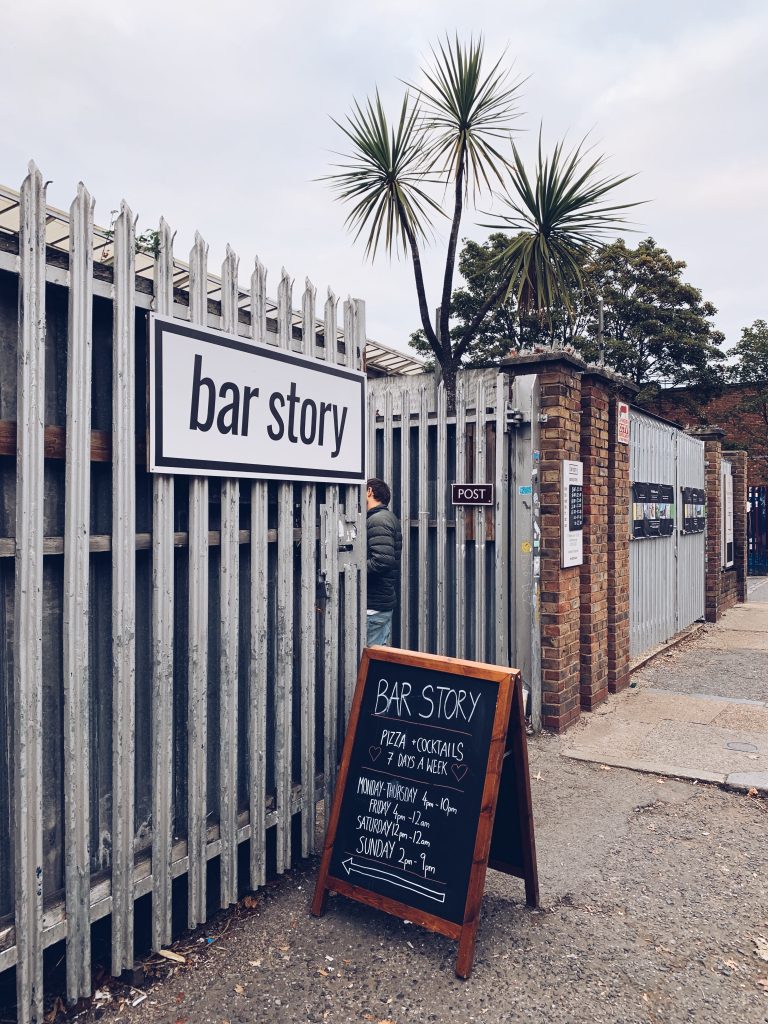 A covered outdoor bar just behind the railway lines. Notably, this multifaceted space is for the cool: a winter garden for anyone that loves an al-fresco drink over cool weekend nights with a well-priced cocktail bar. Additionally, performance spaces and an art gallery keeps regulars and visitors coming back for more.

The most successful independent cinema in London, every movie is £5 so is quite the hit with the local population.

Haring places, gin cocktails, seats at the bar: quite a riot of fun.

Whimsical and inviting, this is a craft beer haven for those walking along the high street. With a late night licence on weekends, it’s a hip-hipster hangout.

See you in Peckham soon?